Call it narrow-minded to focus on just one small country at an international conference, one featuring so many amazing speakers and projects from all around the globe. But as Switzerland is the hosting country, Opendata.ch, is co-organising the event and a third of the participants are expected to be from Switzerland, it seems only fair to showcase some of the highlights from a Swiss point of view.

The Open Knowledge Conference will be the breakthrough event for Open Data in Switzerland, or as Hannes Gassert, vice president of Opendata.ch, has expressed it in a recent interview:

OKCon marks a major milestone for Switzerland… [It represents] a big step for the movement as well as for Switzerland: we don’t have some president saying “I want this now”, but a participatory political process touching all levels of government, and I think that data-driven transparency will eventually emerge as the natural complement to our direct democracy.

Open Government Data has seen some major developments very recently in Switzerland. Just this past Monday 9th September, the Swiss national council voted with a two-thirds majority in favor of an “Open Government Data Masterplan“. By doing so, they opposed the recommendations by the federal council (the government) and sent a strong signal to the executive.

Many interpreted this as a clear signal from our policy makers for more transparency and accountability. The bill garnered support from a wide range of the political spectrum, with only right-wing SVP and liberal-green GLP not voting for it. The week before, one of the key demands of the bill was already fulfilled: A study commissioned by the Federal Archives on the Economic Impact of Open Government Data stated that Open Government Data has an economic potential of easily more than 1.3 billion Swiss Francs (1 billion Euro) per year, in our small country alone. Tages-Anzeiger, a leading Swiss-german newspaper, dedicated half of their front page to this news. 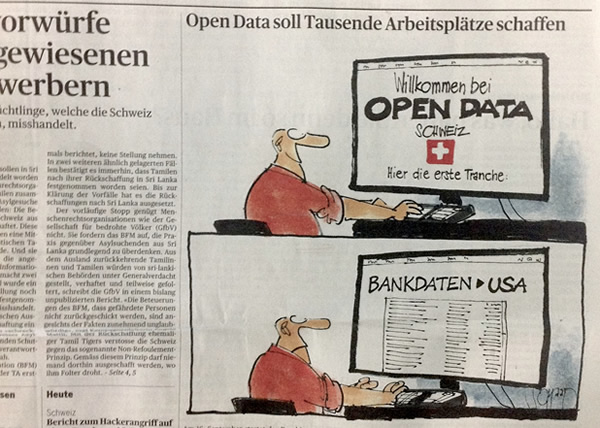 It should be clear by now that with OKCon 2013 just a few days away, the buzz is getting huge here. So lets look ahead at some of the Swiss highlights for the upcoming three days of Open Knowledge in Geneva:

The biggest highlight from a Swiss point of view will of course be the launch of the official Open Data Portal – opendata.admin.ch. OGD@Confederation, and confederation in this acronym stands for the Swiss state, has been developed these past months and will feature data from seven different government agencies. Presented as a pilot project, the portal will mostly offer data sets that are already available, but they will be bundled in a centralised location for the first time with an API. The project was built using CKAN software in conjunction with Liip and itopia, both major sponsors for OKCon and it will run through a test period to be evaluated next year.

On Monday 16 September, 17:30 – 18:30 @ Main Stage Room 2 OKCon will host the official launch event and the unveiling of opendata.admin.ch. Andreas Kellerhals, Director of the Swiss Federal Archives, will speak on the occasion along side Peter Fischer, Delegate for the Federal IT Steering Unit and André Golliez, President of Opendata.ch. And afterwards: champagne! And alphorns. Cheese? We’ll see. 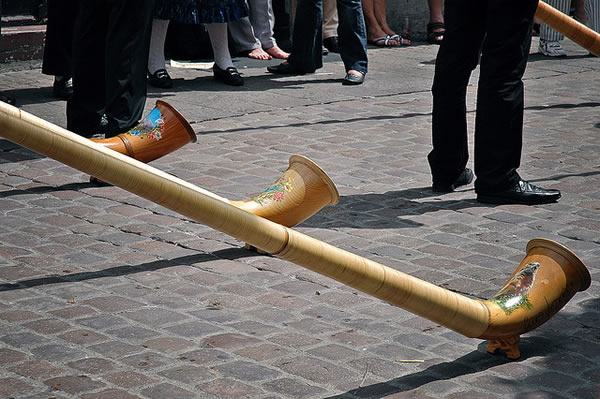 Just before, on Monday 16 September 15:30 – 17:00, Barnaby Skinner, board member of Opendata.ch, will host a session of short talks titled Spotlight on Switzerland that among others will feature Sandrine Salerno, Mayor of the City of Geneva, Matthias Brüllmann, Schweizerische Bundeskanzlei and Michael Grübler, Statistik Stadt Zürich.

But some Swiss highlights start even earlier. On Monday 16 September from 14:00 – 17:00 Benjamin Wiederkehr and Alice Kohli from the prestigious newspaper NZZ will run a workshop on How to turn data into stories, based on the collaborations between interactivethings.com and Neue Zürcher Zeitung. Their most recent series of data visualizations using Swiss maps was published this past summer and can be experienced via this amazing micro site. But their best known work to date is Keine Zeit für Wut, a narrative visualization that was published in 2011 shortly after the catastrophic events in Fukushima and won international acclaim.

The Law Mining Hackathon is starting even earlier on Monday, at 10:00, and will run in parallel to the conference all the way through to Thursday organised by Opendata.ch board members Christian Laux, and Oleg Lavrovsky together with Prof. Jean-Henry Morin . The goal of the Hackathon is summed up in its title “From Code to Sense: Bringing the Law to the Public”; the idea is to “open legal data, while constantly exploring the boundaries of what we can legally do with data, aiming to fully understand and debate the conditions of use, we have been championing openness.” Want to know more? Read here and here!

TPG, Geneva’s public transport agency, is launching their interface to access their real-time data at the event, in a workshop on Wednesday called the Transport Publics Genevois Sketchaton. The plan is to come up with creative ideas to make use of their great new API. Antoine Stroh, Project Manager TPG, will also speak on the Urban Data Challenge panel along with Christopher Pangilinan, San Francisco Municipal Transportation Agency (SMTA) and Bruno Mändli, Trapeze Switzerland. Urban Data Challenge was the very successful hack contest using public transportation data from three cities Geneva, San Francisco and Zürich – a selection of the projects will be exhibited at OKCon.

This workshop will take place on Thursday at Bureau Culturel Genève, co-organized by Dock18, the Open Knowledge Foundation France, Wikimedia (France & Switzerland) and pour-cent culturel Migros the aim is to encourage people to remix public domain works in a creative way. There will be screen printers (bring a T-Shirt), musicians and other artists working with people on hands-on remixes. In the afternoon there will be a walk to the Mont Saleve where a Robert Musil work, now in the public domain, will be interpreted.

The Swiss are crazy for maps, and they have a huge tradition of super-precise mapmaking – it’s a thing almost as big as watches here! Therefore, and as almost everything people do happens in space, which makes Geographic data key for a very wide range of applications, the Open Geodata Panel and Meetup, supported by Esri Suisse, will be of great importance to us. Crisis Mapper Anahi Ayala Iacucci will join three representatives of international Geneva’s Open Geodata advocates: Barbara J. Ryan, Secretariat Director of the intergovernmental Group on Earth Observations (GEO), Francesco Pisano, Director of Research at the United Nations Institute for Training and Research (UNITAR) and Emanuele Gennai, Global Affairs Executive at Esri.

Here’s a highlight with a rather catchy workshop title for you: Frictions. Collaborative creation of knowledge vs. practices in trade and commerce. The example of Open Hardware. Javier Serrano (CERN) will introduce the latest version of CERN’s open hardware license, and as we all know, CERN is located just a few kilometers away from the CICG where OKCon will be taking place. 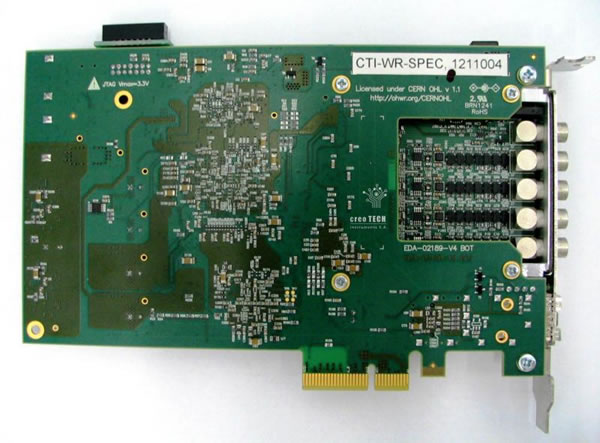 So there you go: a roundup of some of the great activities the Swiss community will be offering at OKCon! We can’t wait to meet and hear from all of the international participants that will be joining us in Geneva! The international exchange of ideas will undoubtedly be the biggest highlight of OKCon 2013. We’ll see you in just a few days time!

And if you need more convincing, check out this video of some of the people behind OKCon welcoming everyone to the conference, featuring all four (!) of our national languages as well as other Swiss highlights: